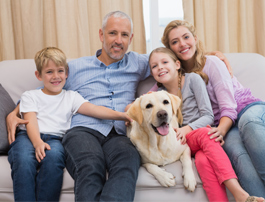 Did you know that your Oilheat system is the only home heating system that can use renewable fuels right now, without any modifications? Or that today's Oilheat burns cleaner and heats your home more efficiently than ever before? To find out more about the intelligent home heating choice — non-toxic, biodegradable, and non-flammable Oilheat — read our Oilheat FAQs.

Q. How does Oilheat compare to other home heating options?

A. Oilheat burns far hotter than other fuels, which allows Oilheated homes to heat up faster with less fuel while maintaining a more consistent, even temperature. Certain system configurations can also provide virtually free hot water, adding even more value into every drop of oil.

A. Oilheat is not flammable by normal means. A match dropped into a tank of heating oil would go out just as if it were dropped into water. Also, in the rare instances when an Oilheat system might malfunction, it would usually release smoke or soot as a visible warning before producing dangerous fumes, while other fuel systems do not. This allows homeowners to rest assured that their family and property are safe with dependable Oilheat.

A. Thanks to dramatic advances in Oilheat burner technology in recent years, modern Oilheat systems boast efficiency ratings over 95%! Average fuel consumption in 1973 was a whopping 1294 gallons, while modern systems have reduced that number to a mere 800 gallons! Greater efficiencies save you money. Please contact us if your system is more than 15 years old to discuss how much you could save with a fuel-efficient upgrade.

A. A long time ago, oil-fired systems produced soot and dirt that would create quite a mess. Fortunately, those days are long behind us — today’s Oilheat burns 95% cleaner than ever before. Emissions have been drastically reduced, and new ultra-low-sulfur blends are reducing those numbers even more. Modern Oilheat is blended with renewable biodiesel to produce Bioheat® fuel, which burns cleaner and more efficiently than ever before!

Q. Is Oilheat bad for the environment?

A. No. In fact, residential Oilheat equipment creates such a negligible amount of emissions that heating oil is not even regulated by the Federal Clean Air Act. Furthermore, Bioheat® fuel is so good for the environment that the government rewards you for using it, via the New York Refundable Clean Heating Fuel Tax Credit.

Q. Are we going to run out of Oilheat soon?

A. No. There is enough Oilheat available to heat the world for a long, long time – even during the coldest winters. The United States has taken steps to create the Strategic Petroleum, the world's largest emergency crude oil stockpile, which has a capacity of 727 million barrels.